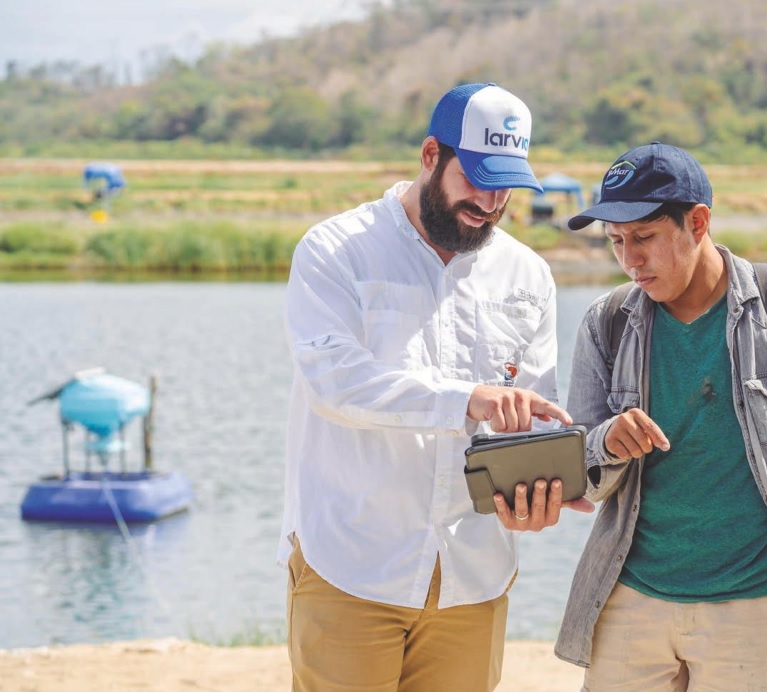 A competitive advantage is that distinctive characteristic which places a company in a higher relative position to compete. The clear example in the shrimp industry is related to the countries near the equator, where there are better conditions of temperature and quality of water, in comparison with those that approach the tropics, this natural advantage is, at the moment, a competitive one. However, there is a promising outlook, a feature that in the coming years will draw a dividing line between success and failure, changing the rules of the game in the aquaculture industry.

Existing versions of aquaculture production remain effective for the time being. Version 1.0 refers to those extensive productions, whose densities are low, in which the control is minimal, and the results are not predictable and that totally depend on natural conditions.

Version 2.0, increased the sowing density and consequently requires water changes, incorporation of air and supplementary feeding, in several cases, using timed feeders, there is greater control. However, results vary and in many cases, results cannot be reached with certainty.

Version 3.0, on the other hand, addressed the need to statistically record and analyze the information of the process, to make intelligent decisions. In other words, the greater the control of the process and the better processing of the information, the more accurately the future results can be estimated and move on the highway of continuous improvement.

In another scenario, the arrival of the internet, mobile devices, robotics, Big Data, artificial intelligence, the internet of things, and other exponential technologies; they amplify the ability to model, simulate, and predict prospective results with relatively low margins of error. The incorporation of these technologies allows the passage from any of the previous versions of Aquaculture, to version 4.0, in which costs are minimized and yields are maximized.

Supported by these technologies, the work in genetic selection would offer a better phenotypic response, nutrition would cease to be intuitive to be precise, and the investment made in infrastructure acquires more value per kg of harvested biomass.

Before long, it will be common to have feeder robots that measure water quality, biomass and make precise decisions, biologists and data engineers making joint decisions, performing mathematical modeling of crops to optimize yields, drones inspecting ponds, and sending to the cloud all the information in close to real time, control of productive parameters of larvae, pre- hatchlings and adults using mobile phones and artificial intelligence algorithms. A digital ecosystem, within a biological system, which gives rise to a profitable business, but especially to a food production system of high biological value and low environmental impact for the benefit of humanity, in this system, those involved take advantage of the technological innovation as a competitive advantage, this is the opportunity that Aquaculture 4.0 brings.

Challenges and opportunities brought by artificial intelligence in the aquaculture industry